For nearly a quarter of a century, Asgard has managed hundreds of billions of dollars— with $40 billion (Australian) now overseen by a network of 3,000 advisors who provide over half a million investors with financial leadership. Asgard is a subsidiary of S. George Bank, the fifth largest bank in Australia. Although big numbers are the everyday vernacular at Asgard, the company has to stay proactive to keep investments flowing in and results for clients exceptional. That involves successfully managing growth, maintaining a superior level of intellectual assets, and being poised to capitalize on change.

Asgard has grown steadily over the last two decades, but recent growth has been astounding; business has doubled in the last several years. One significant growth factor is recent legislation allowing Australians to invest up to $1 million into a super fund of their choice, tax free, until the close of the fiscal year. As Australians seek assets to sell to convert into dollars, business at Asgard is booming.

Lyndall Vanstone, head of operations at Asgard, snapshots what those metrics look like on a daily basis. “Pick any day—say yesterday, as an example. Last year on that day we took in $45 million. This year we took in $152 million.”

As first year business students learn, rapid growth can be both a blessing and a curse. In addition to rapid expansion, a second economic trend is compounding Asgard’s growth management. That is, an exodus of its workforce as the general population migrates to land high-paying jobs in northern Australia’s highly lucrative natural resources industry.

With these two trends on a collision course, Asgard’s leadership quickly ascertained that, unless they found a way to significantly improve the firm’s throughputs and quality, their double-digit annual growth—coupled with loss of knowledge workers—would have a negative impact on the company’s ability to serve its clients. Asgard needed to scale up its ability to operate more effectively to stay ahead of the pack in the highly competitive financial sector. 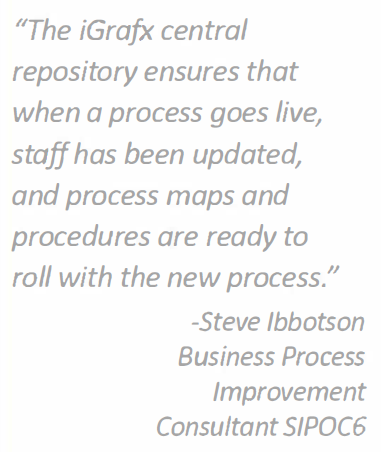 Asgard set out to transform processes that touch all 750 employees in every operational area. Previously, the firm was using Visio to try to map processes, but the application did a poor job at managing the process information. Staff was overwhelmed with various versions of the software while trying to complete a map. The team needed a stable solution that was easy to use, well supported, could integrate with its Lean Six Sigma program, and would provide a central repository to capture what actually happens in core processes using standardized conventions.

“Many staff members had never seen a full end-to-end process before using iGrafx solutions,” says Steve Ibbotson, business process improvement consultant at SIPOC6 Business Improvement Systems. “Most importantly, they often did not see the customer in the process, and very rarely the supplier.” An additional challenge was that new products were being released in a vacuum, without the business knowledge for effective implementation. “Would we need more staff?” asks Vanstone. “Less?”

Underpinning Asgard’s challenge was change itself. Having grown more rapidly than its infrastructure could handle, a huge cultural change was required to scale operations and manage risk. According to Ibbotson, scalability, adapting to growth, managing risk, and supporting the firm’s huge cultural change were key elements to success. “iGrafx software will help Asgard gain consistency and shift the organization’s performance to a level that can be managed through data,” he says.

Known internally as YOGI (Your Online Guide to Information), Asgard’s process transformation is taking hold. A dedicated process team has identified the four core processes that drive the manual and paper processes for Asgard’s managed funds products: application, amendments, contributions, and redemption (move or roll money from one area to another).

The team is also mapping processes for products including direct equities, margin lending, margin loan facilities, and catch facilities, as well as for corporate and personal superannuation products and for associated insurance products. The ability to create hierarchical processes enables the team to drill down into four or five levels of detail, providing specific information necessary for operators to do their jobs.

To keep staff informed and educated, Asgard issues monthly updates that describe all new and altered processes. “In our culture, regularly scheduled communications are part of our project management methodology. We believe that process changes—if communicated in timely fashion and correctly mapped—should enhance, not disrupt normal day-to-day operations,” says Vanstone.

Two different process repositories are in effect: the development repository for work in progress maps that can only be viewed by staff designated as process developers; and the production repository, where approved processes are widely available on the intranet after review, voting, and sign-off. “The iGrafx central repository ensures that when a process goes live, staff has been updated, and process maps and procedures are ready to roll with the new process,” says Ibbotson. Using large-scale, printed maps, the process team has kicked off a program called the Visual Error Reduction Campaign.

The process map for the most common error in each business area is posted on the wall located in the team’s area. Managers use the map for on-the-spot training—an effective hands-on tool. “With iGrafx solutions, we have the opportunity to pinpoint conflicts without assigning blame. Problems are now in the process, not on the person,” says Ibbotson.

Vanstone summarizes the experience of adopting iGrafx solutions. “If all our systems were as easy to employ as iGrafx, we’d have been twice as productive from day one.” The firm is working proactively with data, eliminating the need for several disparate management applications, and implementing a file network flow system with back-end reporting capabilities that identify which processes are not performing to required levels. From there, the team will use the modeling function in iGrafx solutions to streamline productivity by massaging decision points. 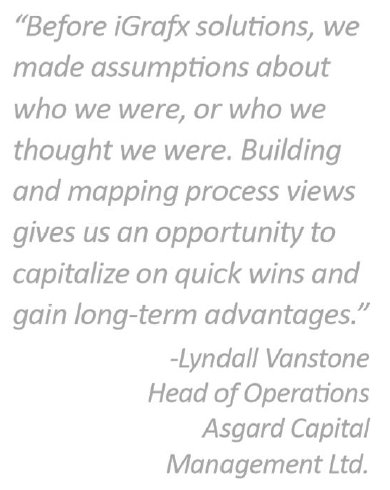 In the area of human resources, process maps helped management standardize employment categories. “When we had ten or fifteen employees, we would pay people based on casual information. Now, with iGrafx process maps, we have specific employment tiers that result in equity among hundreds of employees,” says Vanstone.

Temporary year-end workers were up and running in one day, compared to the normal training cycle of three to four weeks. At the same time, when outside auditors arrive on site, they will find it unnecessary to map processes before they begin their scrutiny, possibly cutting auditing costs in half.

Notably, a significant cultural change has occurred: the IT department is working more in partnership with other areas. Previously, when the IT department would deploy a system enhancement, operations may not have had the knowledge to give it the necessary business requirements. Now, when a change is made to a process map, it automatically flows through the system globally.

The most significant benefit is that Asgard has a clear picture of its baseline operation, so that it can manage growth and embrace change. “Before iGrafx solutions, we made assumptions about who we were, or who we thought we were,” says Vanstone. “Building and mapping process views gives us an opportunity to capitalize on quick wins and gain long-term advantages.”