Hampshire Constabulary can trace its history back to 1832 and the formation of the Winchester City Police. More than 170 years later, the constabulary has around 4,000 officers operating from 47 stations and is responsible for policing a population of more than 1.8 million people across Hampshire and the Isle of Wight.

The current headquarters is located on exactly the same site in Winchester as the first, built in 1847. This houses a number of functional departments, as well as the Chief Officer Group and staff officers. However, the majority of the operational departments, including the force control room, are now located at the Support Headquarters in Netley, near Southampton.

The force, whose jurisdiction includes the cities of Winchester, Southampton and Portsmouth, is currently divided into six local policing areas known as Operational Command Units (OCUs). There are also force-wide OCUs for Crime and Specialist Operations, which include the Roads Policing Unit, Air Support Unit and Tactical Firearms Support Unit.

Hampshire Constabulary has always been a leader in business improvement and streamlining, working initially within the framework of the Government’s Best Value Review, which was designed to give an overview of how forces measured up against specific targets and criteria.

“With the removal of the Government’s requirements for Police Authorities to conduct Best Value Reviews, forces began to look at how to measure their performance in certain areas. Hampshire saw the change as an opportunity to extend the range and scope of its internal review processes, in order to further drive its programme of continuous improvement.

Having developed a Business Improvement Plan, Hampshire Constabulary decided to begin a long-term initiative to map, review and improve its key processes in order to drive efficiencies and improve its performance.

After examining the organisation and its requirements in detail, Hampshire’s Business Improvement team decided to use iGrafx because FlowCharter offered the ability to quickly and easily create process maps across the force, as well as the capability to drill-down and analyse individual elements in detail, without the requirement for in- depth training.

The other important selection criterion was that the maps could all be made available to officers and staff via the iGrafx Platform, so that everyone within the force could see and use them.

“We were looking for a tool that was simple to use, but powerful enough to initially map between 50 and 60 headline processes to level three, that we could drill down into and find out where improvements could be made—that’s exactly what iGrafx gave us,” explained Alan Jackson, senior business improvement officer, Hampshire Constabulary.

Whist implementing the iGrafx Modelling and Platform, Hampshire embarked on a two-year project named ‘Process Excellence’ to review its processes across the force, beginning with the headquarters’ functions. 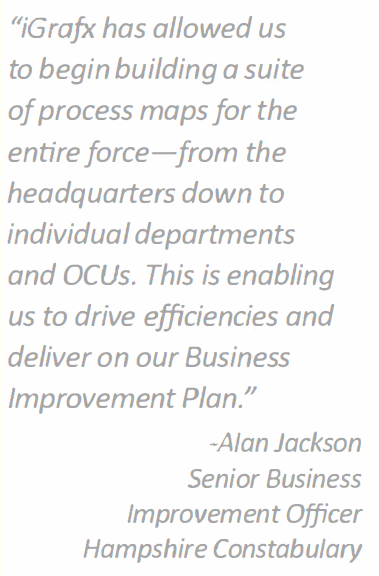 One of the first areas that Hampshire looked at was custody. After mapping all of the processes involved, it used iGrafx’s simulation tool to examine how and where improvements could be made, along with details of the level of improvement that could be expected, without it impacting operations.

“We often had a backlog of people waiting to be processed at certain custody centres,” explained Jackson. “That meant delays and people often having to be transferred to other centres to reduce the waiting time.”

“By mapping the process, examining it in detail and suggesting a few simple adjustments, we were able to show a 75 percent improvement in the number of people we would have to move to other custody centres,” continued Jackson. “Using this as an example also made it a lot simpler to show the value of business process management to the senior management team and get their buy-in more quickly.”

Hampshire Constabulary has also implemented iGrafx to allow everyone across the force to view and drill down into processes, which was not previously possible. This means that all concerned can spot areas for improvement, and if a process needs to be revised, it can be done quickly and the update is immediately viewable.

“Until we implemented the iGrafx Platform, each department had its own file structure and servers,” said Jackson. “As a result, only people within specific teams had access to information about their processes, which made it difficult to see where there were inefficiencies and duplications.”

”iGrafx has allowed us to begin building a suite of process maps for the entire force— from the headquarters down to individual departments and OCUs. This is enabling us to drive efficiencies and deliver on our Business Improvement Plan,” concluded Jackson.