Grammer AG has optimised around 100 processes and documents

Mature structures have an advantage that should not to be underestimated: they are skilled and the processes involved are well-rehearsed. On the other hand: processes which have evolved over many years in the business are often not transparent, rarely described in detail and are even more rarely comprehensibly documented.

Such general conditions are counter-productive in the face of the rapid changes taking place in the market, progressive digital transformation and growing global competition. Only when business processes can be systematically optimised, can an organisation remain flexible, competitive and stand its ground on the market over the long term. This is even more important if a company is on a very dynamic course and growing rapidly.

Such as Grammer AG. The global supplier for car interiors and utility vehicle systems with its headquarters in Amberg in Germany is experiencing exceptionally stable business development. The Group’s sales, for example, rose from 2011 to 2015 by more than 30 percent from 1.09 to more than 1.42 billion euros, and the number of staff employed worldwide rose in the same period from around 8,400 to close to 11,400. As a global partner for the automotive industry, Grammer is represented globally in 20 countries with more than 44 production and sales locations with its two company areas of automotive and seating systems. 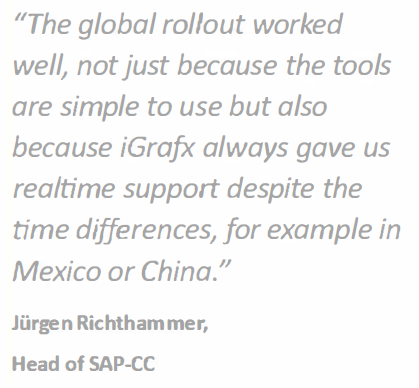 “In the past six or seven years, we recorded enormous growth, not only in terms of sales and staff but also in terms of internationalisation”, says Klaus Günther, responsible for Business Process Management at Grammer, pointing out the starting position. “The result was, amongst other things, that we needed to introduce more and more people to the processes and we are still doing so. It is of course helpful when the processes are well-described and standardised.”

In addition to this was the fact that the structures which had grown within the company made systematic process optimisation barely possible. While the specialist departments did store their documents in an internal company intranet tool, it was generally without reference to a process. Transparency of processes in the individual departments also left a lot to be desired. “If an area optimised certain sub-processes, this usually occurred without coordinating with other areas. It is clear that the interfaces ended up falling by the wayside.” So Klaus Günther and Jürgen Richthammer, responsible for the SAP Customer Competence Center at Grammer, set up a project in 2014 on the subject of BPM to create structured process optimisation in the company.

“As a first step, we defined what we needed and which criteria need to be fulfilled”, explains Klaus Günther. “First of all, we wanted to record, model and make our processes transparent and present them in a standardised way. We wanted this to form the basis for optimisation opportunities to be purposely sounded out and implemented.” The definition of goals and criteria turned into a specification which ultimately formed the basis for sounding out the market for possible providers of solutions.

In parallel to this, Klaus Günther and Jürgen Richthammer created a detailed evaluation matrix which they used to sound out the four potential providers. The main categories of the matrix were the “modelling”, “ability to publicise” and “strategic expandability”; for those with responsibility at Grammer, it was predominantly about the expandability in terms of graphic representation, simulations, evaluations and interfaces to workflows. Each category contained numerous sub-criteria with various degrees of prioritisation. The costs were recorded in their dedicated category.

The results from sounding out the market and evaluation were ready in August 2014, as Klaus Günther explains: “After looking in detail at the four candidates and their solutions, our matrix fortunately gave us a pretty clear picture: iGrafx had the highest points score overall and was in front in all three main categories and the sub-categories. The priceperformance ratio was also right.” So, we got down to business and started by installing the iGrafx Platform onto the Grammer server as the database. Throughout 2015, step by step, all current processes in the system were adopted, modelled and the interfaces aligned with one another.

As an introduction to the work with iGrafx Modelling and Platform, the experts from iGrafx explained to the four members of the BPM Executive Management Team at Grammer which detailed functions the tools offer and how they are operated. Jürgen Richthammer: “This proved to be pleasingly uncomplicated. The user interface is clear and it is easy and intuitive to access. After just a few days, we were able to work with it independently and only needed help from iGrafx in isolated cases.” The rollout could begin. At first, iGrafx was installed around 20 times in the head office in Amberg. At the same time, the BPM executives shared their knowledge and instructed the users. “It essentially involved showing them how the process modelling works, how documents are uploaded and integrated and how the workflow approval works”, explains Jürgen Richthammer. “The staff could then deal with this more or less on their own.”

The start of 2016. The foundations had been laid and the new Grammer Business System could go live around the world. Here as well, the team from Amberg could benefit from the user-friendliness of the iGrafx solution, as Klaus Günther comments: “The tool is simple to operate and the knowledge required for it is very easy to transfer.” Amongst other things, iGrafx provides the user with three access possibilities: via each document, via the process or via the role – for example as a planner.

Worldwide roll-out within a few weeks

Some 30 production facilities had be covered by the global training. “At each factory, we invited up to six members of staff to take part in the training.” The process was subdivided into four waves – the first wave in Mexico and the USA, the second in the European countries where the training was delivered in English. The third wave was in China and Japan and the final wave in German-speaking Europe. “The training sessions were very positive. We started with the first wave on 28 February 2016 and were already finished by 31 March.” iGrafx has been running throughout the global Grammer Group since 15 April 2016. And the initiators of the project are satisfied, both with the processes and the previously obtained results. Jürgen Richthammer: “Our goal was to bring transparency into our process landscape and to clearly define both the processes and each of the process owners. This has now been implemented and our process map is now in place.” The ongoing processes has thereby been initiated, as Klaus Günther explains: “Every area has the task of independently modelling its own processes with iGrafx, aligning the processes with the affected neighbouring areas and continuously working on optimisation.”

Since the middle of April, processes and documents approaching 100 in number have meanwhile been optimised at Grammer. The approval of each of the changes involves adhering to the principle of triple-checking: after the responsible BPM Manager and the process owner have checked the optimisation for its functional aspects and found it to be good, the BPM Executive Management Team check it all formally. If all checks are positive, the process optimisation will finally be approved and publicised. Conclusion: The evaluation matrix for selecting the system has provided good service. “We did the right thing in choosing iGrafx”, notes Klaus Günther. And Jürgen Richthammer concludes that: “The global rollout worked well, not just because the tools are simple to use but also because iGrafx always gave us realtime support despite the time differences, for example in Mexico or China.” At the end of December 2016, Grammer upgraded to the latest releases of the iGrafx Modelling and Platform. (Current versions: “iGrafx Origins with FlowCharter” and “iGrafx Architecture Platform Extension”).