When Piraeus Bank Egypt SAE (PBE) was founded in 1978 as the Alexandria Kuwait International Bank, its role was to serve the large number of Egyptian expatriates living in Kuwait. Since then, the bank has extended its remit and grown to be one of the Egyptian financial sector’s best-known institutions.

After becoming the Egyptian Commercial Bank (ECB), as a result of changes in its capital shareholding, in 2005 it was integrated into Piraeus Bank Group—the Greece-based bank with more than 570 branches across the US, UK, Serbia, Romania, Cyprus and Albania and assets in excess of €18 billion.

As the Egyptian arm of Piraeus Bank Group, PBE now offers both corporate and retail banking products, as well as treasury and investment services, through its network of more than 50 branches across the country.

In order to compete effectively and drive shareholder value, it is essential for PBE to increase its market share in Egypt by building customer satisfaction through innovative products and continually improving its level of service. Coupled with this is the challenge of compliance with the minimum requirement of the New Capital Accord, which covers operational risk for the first time.

In order to meet the requirements of Basel II, whilst maintaining its customer service, PBE has acquired and deployed iGrafx® delivered by ProServ.

PBE faced the double challenge of maintaining the quality of its customer service and driving market share in an increasingly competitive market, whilst meeting the new regulatory requirement presented by the first pillar of Basel II. 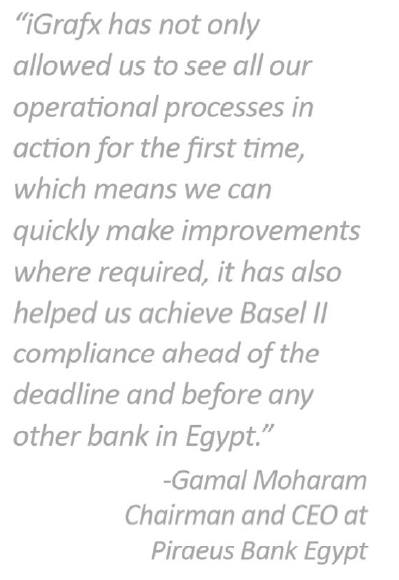 Known for its innovative use of technology, the bank had already invested heavily in order to comply with its domestic regulatory requirements, but the new Accord required the bank to make provision for “the risk of direct loss resulting from failed or inadequate internal processes, people and systems or from external events”.

As a result, it was essential for PBE to be able to examine operational processes in order to find and remove potential sources of operational risk across the bank. It also needed to be able to evaluate new processes that could affect its risk profile off-line, without disrupting business operations.

In order to meet its operational risk requirements and streamline its processes, PBE needed an effective modelling tool and set three clear selection criteria: it had to be scaleable so that it could be expanded across the bank after the initial project; it must be intuitive and easy to use, requiring little end-user training; and it had to have a low total-cost-of-ownership (TCO), including licence structure, training, implementation and rollout.

PBE initially used the iGrafx Modelling and Platform, delivered by ProServ, to map its core operational processes in order to understand how they looked, spot inefficiencies and bottlenecks, and see how they could be improved.

The team achieved this by using iGrafx’s ‘process decomposition’ capabilities to break down every process into sub processes, which allowed them to fully understand how each one worked, as Faisal Mansour, Director, Central Operations at Piraeus Bank Egypt explained:

“By being able to break down each process and then graphically represent the information, we could quickly and easily see where problems lay and make improvements. It also meant that we could begin to measure the bank’s operational risk more effectively.”

iGrafx has also enabled the operations team and managers across the business to use the same graphical modelling and evaluation techniques to assess the impact of new processes or improvement strategies off-line without disrupting critical business operations.

“In addition to examining existing processes, iGrafx uniquely allows us to model any proposed process improvements. This means that we can quickly see any problems initiatives may cause and mitigate associated risk before going online,” said Mansour.

The implementation began in March 2007 and took a total of seven months, with PBE looking at all of its internal operational processes.

“ProServ really understood our needs, and its experience in business process management and analysis were critical to the project being delivered on time and to budget. As well as delivering the technical help for the implementation, the team also provided invaluable support with the process improvements across the bank and allowed us to maintain competitive advantage,” said Mansour. 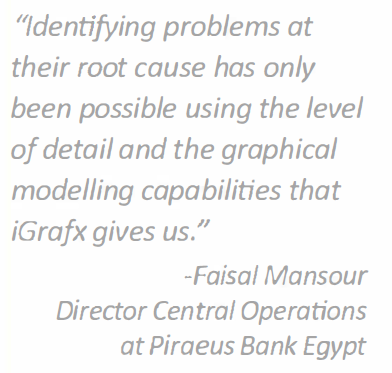 The implementation of iGrafx has allowed PBE to examine its business in extreme detail and carefully analyse internal processes across all operational units using standard graphical models.

This has given the operations team a much clearer understanding of processes at a granular level right across the 1,200- strong organisation and allowed them to see common problems, irrespective of whether they are specific to an individual branch office or the entire company.

“Identifying problems at their root cause has only been possible using the level of detail and the graphical modelling capabilities that iGrafx gives us,” said Mansour. “This has allowed us to dramatically improve operational efficiency by tackling issues at their root cause. It also allows us to model the effects of proposed solutions and process improvements off-line, meaning that we know they work before bringing them online —this has significantly reduced our operational risk.”

Using the iGrafx central repository has also enabled PBE to manage and distribute all process initiative information, allowing the team to quickly get summaries of process changes, drilling down into extra detail, as well as using it as a training aid.

“iGrafx has not only allowed us to see all our operational processes in action for the first time, which means we can quickly make improvements where required, it has also helped us achieve Basel II compliance ahead of the deadline and before any other bank in Egypt,” concluded Gamal Moharam, Chairman and CEO at Piraeus Bank Egypt.