In 1906, when William Elvis Sloan started up Sloan Valve Company, he sold only one Flushometer the entire year. The following year, Mr. Sloan doubled his business and sold two. With its revolutionary design and ingenious simplicity, the Flushometer— a hydraulic flushing mechanism as an alternative to a toilet tank—was obviously a tough sell.

Today, Sloan Valve’s foundry and manufacturing facilities are among the most modern and efficient in the industry. The benefits of Flushometers compared to toilet tanks remain as clear today as they were at the turn of the 20th century, offering lower water use, less maintenance, relative freedom from breakage and vandalism, and virtually no recycling time between flushes.

Sloan has invested wisely in its enterprise during its hundred-year history, understanding that maintaining its competitive preeminence requires constant tending.

Toward that end, Sloan adopted iGrafx® solutions as a core application to help transform its enterprise into a process-focused operation. The result: Sloan Valve has identified and reinvented core practices and processes and undergone a radical change in the way it does business. This is in large part due to the use of iGrafx solutions to diagram, analyze, and alter methodologies.

While the company has continuously adopted new technologies to improve day-to-day operations, executives realized that incremental changes produce only incremental results. As a new initiative, Sloan Valve sought cultural and organizational change outside its SAP investment to drive greater benefits to the entire organization. The goal was to more explicitly link IT investments with business benefits, raise the awareness of process orientation at all levels of the company, and leverage technology to enable new processes.

According to Tom Coleman, chief process officer at Sloan Valve, many companies rely on specific methodologies and continuous improvement techniques to modify processes and relieve bottlenecks—which don’t necessarily deliver tangible, end-to-end results. “We take a different approach,” he says. “We focus on building holistic platforms for change and developing breakthrough processes that give us huge results.” Sloan Valve adopted iGrafx technology to help create major impacts on high-level process flows and enable people to see and understand how processes look and how they need to change.

With more than a decade of experience in technology management, Coleman came to Sloan Valve as CIO. Now, expanding his role as chief process officer, he is the catalyst for change. “What’s important is how we develop that elusive layer between strategic planning and information technology from an end-to-end business perspective,” he says. “Initially, we had to remove siloed technology issues from the discussion, focus on core principles of business process management, and develop a series of imperatives to start the company on its process journey. iGrafx software was instrumental to our efforts.”

Sloan Valve is using iGrafx software to diagram five core processes: new product development and implementation, customer support, order to cash, order acquisition, and customer communication. Each of these core processes has a direct effect on the company’s value proposition—the sum of which compel people to buy Sloan Valve products.

Using a technique they call process decomposition, Coleman and his team decompose processes into sub-processes to fully understand each one. “We use this technique in order to easily segregate and visually understand information,” says Coleman. “iGrafx does a really good job of this, and our previous tool, Microsoft Visio, did not.” A single process may have seven or eight boxes on the first page, each of which can be clicked on to drill down multiple layers. As a SAP® operation, Sloan Valve is looking to further link each of these processes into its SAP solution and integrate strategic goals into balanced scorecard and swimlane principles and practices.

Five cross-functional teams, each consisting of about seven members, are working to identify as-is processes, develop to-be processes, and then move new processes to implementation. The teams use iGrafx solutions to diagram workflows in real time and then print them on large engineering printers. All models and supporting documents are also stored and managed in the iGrafx Platform repository.

By developing process in real time with iGrafx, the change activity becomes “much more than a back office job done by someone in IT,” says Tom Hillison, manager of business process management at Sloan Valve.

Using the tool right on the screen, Hillison and Coleman demonstrate to senior management how terrible as-is processes look. “This technique typically shocks senior management in terms of how the company actually runs,” says Coleman. From there, buy-in at all levels is achieved and permission is granted to develop to-be processes using very controlled decomposition techniques and carefully diagram processes into details.

“When we put those big diagrams up on the wall, it’s really the first glimpse most people have of a process in action,” says Hillison. “The iGrafx diagrams become a central rallying point that focuses us on customer results rather than functional departments.” Previously, people could not visualize, let alone understand relationships between steps, activities, and outcomes. “When the iGrafx to-be diagram goes up, I take the printed as-is diagram off the wall and tear it up in front of everybody,” says Hillison. “At that point, the change process is universally understood.” 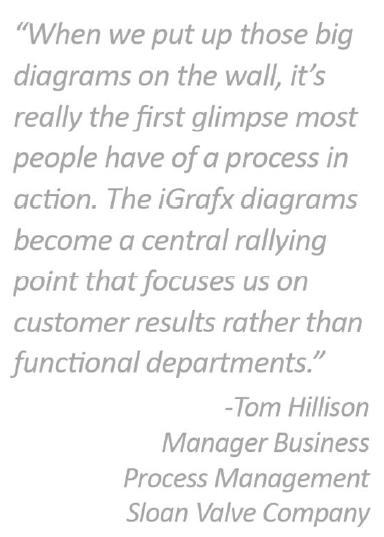 Direct results of using iGrafx solutions are apparent throughout the organization. In the area of engineering change management, a cross-functional team is now managing a previously paper-laden process that has become completely paperless within the SAP system.

In vendor and supply management, the process of initiating and supporting special orders in SAP was reduced from three and half days to one hour. “We consolidated the activities of about a dozen people into one person with a backup,” says Hillison. “Essentially we can accommodate new part requests in about 15 minutes.”

Notably, Sloan Valve is working on reinventing its new product development process, and expects to reduce its time-to-market cycle by approximately 75%.

For Sloan, the beauty of iGrafx software comes from its ease of use and cost effectiveness, as well as the ability to centrally manage files, simplify views according to need, and decompose processes by drilling down into detail. From a management perspective, iGrafx software enables the team to centrally manage files and display them in understandable ways at all levels of the enterprise in order to drive the cultural change needed to be a process-driven organization.

SAP is a registered trademark of SAP AG in Germany and in several other countries.