A component of the Parkland Health and Hospital System, Parkland Memorial Hospital is located in Dallas County, Texas and is a Level One trauma and burn center, recognized worldwide. In addition, the hospital is the primary teaching institution of The University of Texas Southwestern Medical School. Its mission is to make health care available to all of the citizens of Dallas County.

Parkland is consistently rated among the best hospitals in the U.S., being listed in the top 100 hospitals in the country. Because of its affiliation with the medical school, the hospital is a premier training center for the nation’s physicians, which provides access to top-quality medical care for insured and uninsured patients. In addition, the hospital delivers 15,000 babies per year—more than any other hospital in the U.S.

John Cox, Director of Training and Development at Parkland, is responsible for productivity and process improvements. He has an enormous job, as gauged by the 2003 statistics on the hospital: It employs more than 7,500 people and has an annual budget of more than $1 billion dollars. In calendar year 2003, 42,270 patients were admitted, 15,796 babies delivered, and 993,416 patients treated in its clinics, health centers, and emergency room.

Mr. Cox became interested in advanced process improvement methods after learning about the Six Sigma program at General Electric Corporation (GE). Some of the hospital’s processes, such as patient registration, were similar to several of GE’s healthcare client’s processes. Mr. Cox researched how GE improves and manages processes, and also investigated process excellence in the healthcare industry at Johns Hopkins Health and Hospital System. Then, he formed a team of project managers from his department, John Hughes, Michael Williams and Barbara Mays and went to Motorola University for Six Sigma Black Belt training. It was at Motorola that Mr. Cox and the team learned about iGrafx® and its software product, iGrafx® Process™ for Six Sigma. The team looked at other solutions, including other modeling software, but none matched iGrafx’s simulation capabilities and diagramming ease of use.

Mr. Cox purchased several copies of the iGrafx software. The team attended an iGrafx training course to help maximize their investment and get started with their project. The team was impressed by the cost-effectiveness of the product, as well as the great visual and graphing capabilities. It was an added plus that the product integrated smoothly with MINITAB®.

Like all county hospitals, Parkland was facing serious budget control issues. Because of the tight budget, Parkland was limited to doing one project at a time and decided to bring things under control with a process improvement initiative. The hospital hired consultants to observe and analyze how certain things were done in selected departments. Unfortunately, this generated resistance by employees, who viewed the consultants as agents of management who were looking for ways to cut headcount rather than be helpful advisors. 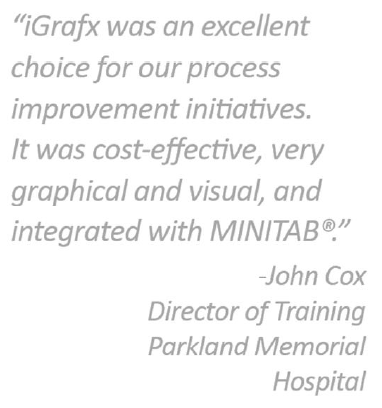 Based on this experience, Mr. Cox and his team took the approach of deploying iGrafx Six Sigma tools. Mr. Cox and the Six Sigma team educated the Parkland staff to understand that, while each process improvement project would have a different focus, they shared one goal: to help the hospital to efficiently serve more patients. Since iGrafx was cost-effective, very graphical and visual, and integrated with MINITAB, he was able to convince his superiors that iGrafx would be an excellent choice for their process improvement initiative as well. Mr. Cox demonstrated how iGrafx would help his team analyze, simulate, and reduce cycle times for processes involving service to patients. By reducing cycle times, the hospital could serve more patients, and in turn, generate more revenue, which could further increase the number of patients served.

The first two process improvement projects were undertaken in the Sonography Department and the Intermediate Care Center (ICC) for Women. Following the successful completion of these projects, the Six Sigma team planned to apply process analysis and improvement techniques to other large departments including Radiology, Labor and Delivery, Surgery, and Oncology. The patient volume in these departments has become so high that Parkland must improve processes to dramatically reduce patient cycle times.

For the ICC for Women project, Mr. Cox and his team applied Six Sigma methods in parallel with iGrafx Process for Six Sigma software. They were able to identify major bottlenecks or wait times in the ICC process. The number of bottlenecks were identified and illustrated in the “Measure and Analysis” phases of the Six Sigma Methodology. An analysis of the “as-is” state or “current” state of processes in this department illustrated that adding personnel and proper employee scheduling could improve cycle time.

These improvements to the process were determined by running Six Sigma Design of Experiments, or DOEs. Mr. Cox’s team ran iGrafx simulations in parallel with MINITAB software for statistical analysis that enabled them to access data, analyze the data, and improve on the results.

All of the suggestions were implemented except for adding another financial counselor due to budget constraints. In that case, the hours available were expanded.

It has been observed that applying these changes to the process has reduced wait times and cycle times for the patients. Now, the Six Sigma team has moved into the “Control Phase” of the Six Sigma DMAIC model to assess and document these improvements.

In the Sonography Department, the Six Sigma team performed process mapping to identify suspected wait times for services. After measuring and mapping out the processes and procedures for performing sonograms, they found multiple areas where lengthy wait times occurred between steps in the process.

The Sonography Department solved these problems by implementing the following changes:

As a result of these changes, the department reduced wait times, cut costs dramatically and increased revenue.

At the beginning of this project, only iGrafx process mapping and MINITAB were needed to identify major cost areas. iGrafx Process for Six Sigma enabled the team to see wait and cycle times and allowed them to modify process variables and conduct simulations, resulting in recommendations to improve the process.

By adding personnel and improving the employee’s work schedule in the ICC for Women, the rate of patients leaving the center before being treated dropped by 50 percent, representing a major increase in customer satisfaction. In addition, the hospital had a potential increase in revenue of approximately $1 million from improving this process.

The Sonography Department achieved similarly impressive results in improved customer satisfaction and new revenue. Approximately $900,000 new revenue was generated the first year by identifying and reducing lengthy wait times in it’s the department’s processes, thus increasing the number of patients that could be seen.