A Robot by any other name – What is RPA?

In the great big wonderful world of Robotic Process Automation (RPA), there is still confusion over what it actually is and what it does.  Some of this confusion stems from the name itself so let’s take just a few minutes to provide some clarity.

Robotic Process Automation is made up of various software tools, or Bots, that are configured to perform routine, repeatable system tasks on behalf of a human worker.  This is typically done by watching the user perform a task and capturing all associated steps using tools such as process mining and discovery.  The RPA system can then be set to perform the automation by repeating those same tasks.  As long as the process or systems do not change, the bot will continue doing its thing.

Here is where the confusion comes in.  The “P” in the name implies there is a process being automated.  The reality is RPA does not handle your end to end process.  It is better understood to think of it as capturing the steps of performing a task within a process.  But I guess the RTA acronym was already taken Regional Transit Authority, so RPA it is.

Let’s consider this very simple application process as an example. 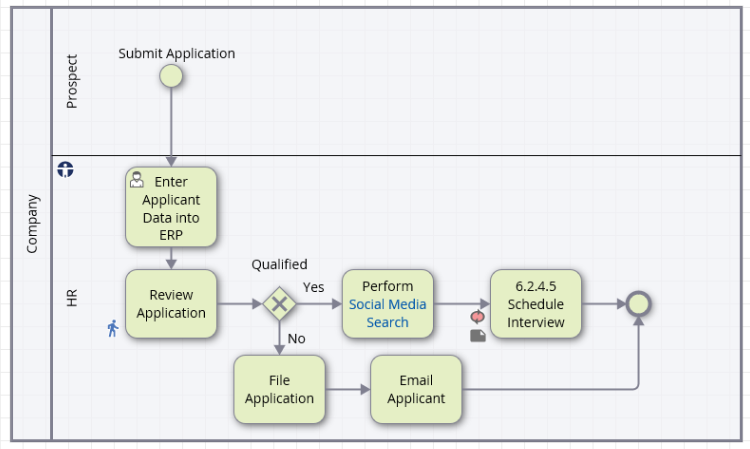 Here the applicant submits their application via a web-based form or pdf.  The HR worker now must manually enter that information into the ERP system, then review the applicant to determine if qualified.  With RPA, we may employ a bot to perform the task of copying applicant data from one system to another.  While the HR worker may still be required to review the qualifications, they are freed of the mundane work of data entry. We might even have multiple RPA bots employed within a single process, handling work, and handing off from one bot to another.  In this same example we could employ a bot to generate the email if the applicant is not qualified, or even to send the interview request if the candidate seems like a good fit.

RPA is also not intelligent. Humans are capable of working with pictures and generalities to perform tasks.  Think of your IKEA instructions for assembling a table.  If I told you I was hungry and asked you to make sandwich, and then showed you a picture, you would have a general idea of what to do.  Even if you had never made a sandwich before you would go to the kitchen and find the bread.  RPA bots are not like that.  They must be told, in very fine detail, what to do and how to do it.

You get the idea… The average toddler is easier to enable than a bot.  As you can imagine RPA development takes time and requires that you think of your processes and tasks in a completely different way.

RPA does not really deal with Process but Tasks.  Say RPA, Think RTA.  RPA is not intelligent, and it does not learn.  Because of this we need to think differently.  It is important that we understand our process to know when, where, and why to employ RPA.  This will be covered in my next article.

First – What is it?What it Isn’t!To Summarize